Akaushi History in the U.S.

ORIGIN AND DEVELOPMENT OF THE AKAUSHI CATTLE BREED

Akaushi, known as Red Wagyu or Japanese Brown cattle, a Bos taurus type of cattle had their origin and evolution in Kumamoto, Japan.

Kumamoto is located in the middle of Kyūshū island at a latitude of 320 48’ North and 1300 42’ East, in the northwest part of the Kumamoto Prefecture. Kyūshū is one of the four (Honshu, Hokkaido, Shikoku) major islands of Japan with an inland-basin climate. 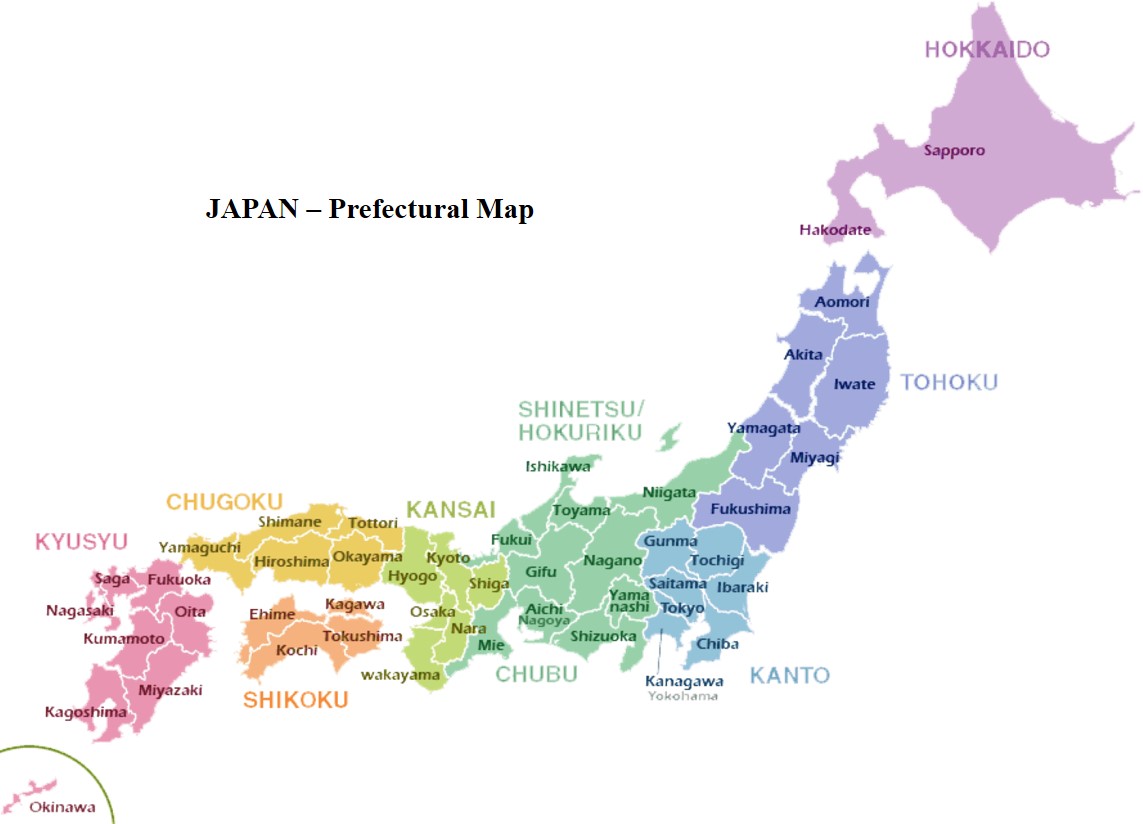 The elevation of Kyūshū Island is 37.7 meters above sea level with an annual average temperature of 16.80C and an annual average precipitation of 1,593 mm. During the winter season, the temperature fluctuates between 5 and 120C. The rainy season, called baiu, occurs from mid-June to July, just before the beginning of midsummer. Summers are typically hot and humid with temperatures reaching 340C in some years. 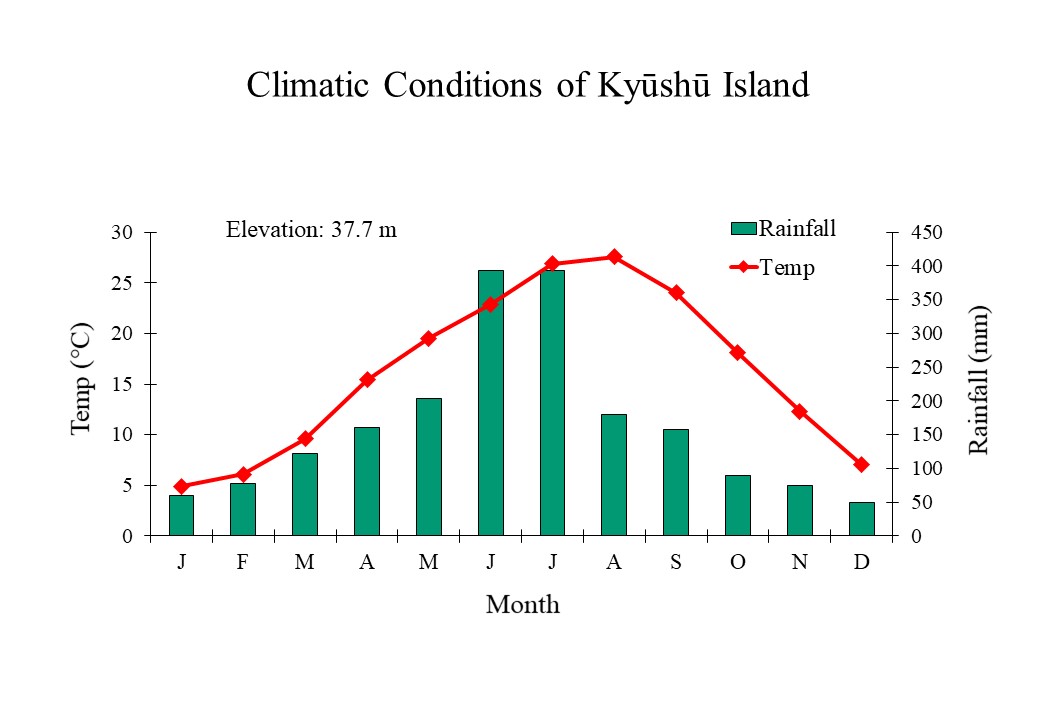 In addition, an important physio-graphical feature of Kyūshū Island is its mountainous topography and its character as a volcanic country. Some volcanoes such as Unzendake in the Nagasaki Prefecture, Mt. Aso in the Kumamoto Prefecture, and Sakurajima in the Kagoshima Prefecture are still active. Grassland covered with old volcanic ash and pumice called shirasu is the predominant soil in southern Kyūshū. Crop production on the shirasu uplands is difficult because this type of soil does not retain moisture, which creates a drought condition, resulting in unstable crop yields. Therefore, Akaushi cattle were developed to meet the quality demand by consumers and the productivity required by this challenging environment to achieve profitable production levels. Today, southern Kyūshū is Japan’s leading producer of beef cattle as well as swine and chicken. 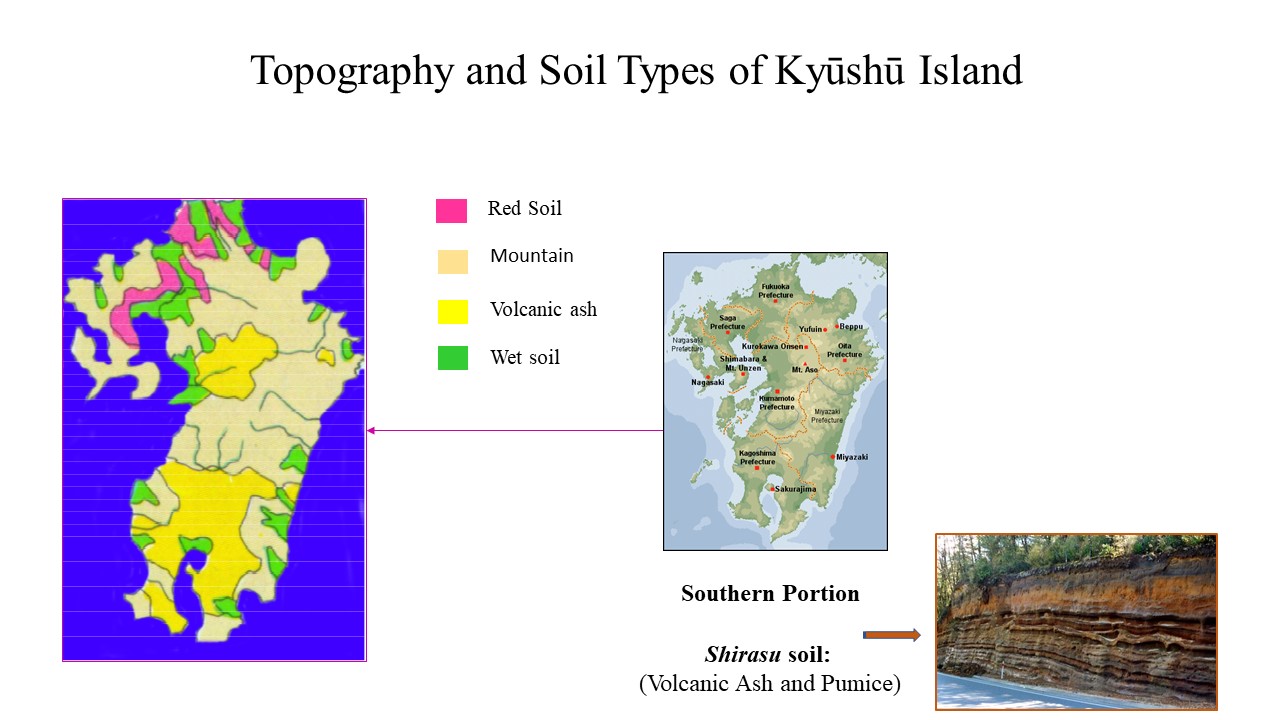 Cattle breeds are divided into two kinds in Japan. One of them comprises dairy cattle, including mainly Holsteins, grade Holsteins, and Jerseys. The other type is beef cattle, nearly all of which are called Wagyu. The word Wagyu refers to all Japanese cattle by its direct translation of its two grammatical parts, “wa” and “gyu” meaning Japanese and cattle, respectively. The Wagyu cattle are the Japanese indigenous breeds, which have been subjected to a genetic improvement over the last 90 years. Today, there are four breeds of Wagyu cattle, the Akaushi (Red Wagyu or Japanese Brown), the Japanese Black (Black Wagyu), the Japanese Polled, and the Japanese Shorthorn. A small number of Aberdeen Angus, Hereford and Charolais have been integrated into the beef breeds of Japan as well.

Native Wagyu cattle of the 1800’s were small in size and mainly used for draft proposes. These original cattle populations were the result of the first bovine migrations to the western half of Japan around the second century from Northern China via the Korean peninsula. Thus, cattle from South Korea migrated to southern Kyūshū at the same time and were blended with local types. Hip height measurement for adult females were about 112 cm and 123 cm for adult males. In contrast, these sizes are comparable to 8 and 11 month-old modern Akaushi calves, respectively. Apart from the meat quality, native Wagyu had a poor milking ability, low growth rates and were poor food converters. Breed history records show that a great variation in red coat color was common on native types cattle of the Kyūshū district.

After the Meiji restoration in 1868 the new Japanese government sought to improve the indigenous Wagyu cattle for the first time and by the 1900’s Simmental and Devon cattle were imported from Switzerland and England to cross with the native cattle raised over the years in the Kumamoto prefecture. Accordingly, from 1900 to 1912, the upgrading process by European breeds was popular in the breeding of the native Wagyu cattle. The results of these crossbreeding programs, however, were not always successful. The first and second generations were improved mainly as a result of heterosis responses resulting in rapid growth and increased milking performance. However, this new type of animal was very inefficient in performing the rice field cultivation practices, had poor meat attributes, and poor dressing percentages. Therefore, Japanese farmers began to prefer the small and indigenous type of cattle again. Meanwhile (since 1912), the lifestyle of the Japanese society was improving gradually and the demand for meat was increasing. Since the most desirable type of cattle in those days was too small and inefficient in the production of good red meat, the improvement of cattle was recommended again by the Government. Thus, the cross-breeding process continued until 1925.

After this selective cross-breeding stage, two distinct strains of Akaushi were defined, the Kumamoto and the Kochi types. The Kumamoto Akaushi were strongly influenced by Simmentals and Devons with a very small influence of South Korean cattle. On the other hand, a high proportion of Korean genetics was maintained to develop the Kochi type. Therefore, these two strains of Akaushi differ greatly in their breed characteristics. The Kochi Red Wagyu has a profound resemblance to the original native Korean cattle characterized by their small size, refined bone structure and lack of muscle development. In addition, the Kochi type is black pigmented around the nose, feet, and legs. The Kumamoto Red Wagyu cattle more closely resemble modern Western beef cattle.

In order to identify and fix specific conformation and quality traits from the various breed types resulting from the crossbreeding, a registered association was established in 1923. Then, in 1944, it was officially recognized as a breed and given the name Japanese Brown because of its distinctive brown color (Nishida, 1973). After 22 years of practicing this selective registration system, Akaushi cattle were fairly uniform. The use of Akaushi as draft cattle gradually shifted to beef production, due to the mechanization of agriculture and increasing demand for beef. Accordingly, in 1957, draft performance was the primary objective for improvement, while meat performance was secondary. Later on, in 1966, draft performance was completely omitted from the breeding objectives. In 1974, a central performance and progeny testing system was established to produce superior sires by embryo transfer. In addition, a unique dam evaluation system was implemented for the first time with the idea to speed up the rate of genetic improvement.

This carefully controlled environment, along with the Japanese government’s interest in improving this distinctive line of cattle – designated as a protected breed – reaped enormous benefits for the Akaushi breed. Carefully controlled breeding programs, intensive research, and study on the traits of these cattle have led to a breed that produces consistent and uniform highly palatable beef.

AKAUSHI ARRIVES IN THE UNITED STATES of AMERICA

In 1994, new genetic lines of Akaushi cattle were imported into the state of Texas, United States and they represent the largest Akaushi breeding nucleus outside of Kumamoto, Japan.